Police: “No appearance of braking” in deadly bus crash

(CNN)There was “no appearance of braking” when a tour bus slammed into the rear of a tractor trailer on Sunday, near Palm Springs, California, killing the driver and 12 passengers and injuring dozens, a state police official said Monday.

“There were no skid marks from the bus at the time of the collision,” California Highway Patrol Border Division Chief Jim Abele told reporters. “The only skid marks were directly related to the big rig as it got pushed forward.”
Police said the 1996 MCI bus, operated by USA Holiday, was returning to Los Angeles from the Red Earth Casino near the Salton Sea when it crashed into the tractor trailer around 5:17 a.m. PDT on Sunday. The crash happened a little more than an hour after the bus left the casino, according to Abele.
The chief said he was told by an officer at the casino that the bus arrived there between 11 and 11:30 p.m. on Saturday and left around 4 a.m. on Sunday.
Authorities on Monday identified 12 of the 13 people who were killed including the driver, Teodulo Elias Vides, 59, of Los Angeles. The Riverside County Coroner’s Bureau confirmed that 10 of those killed were women and three were men.
Abele said a manifest put together by the casino identified the passengers — and identified the bus company’s owner and operator as the bus driver. The bus, which Abele said didn’t have seat belts, was the only one the company operated, according to authorities.
Relatives of Vides could not be reached late Monday.
The 31 people who were injured were also identified on Monday, including the tractor trailer driver, Bruce Guilford, 50, of Covington, Georgia.
The National Transportation Safety Board is investigating the cause of the crash. Among many factors, the NTSB will look at are both drivers’ driving records, accident history and level of training, the agency said.

Bus was inspected in April 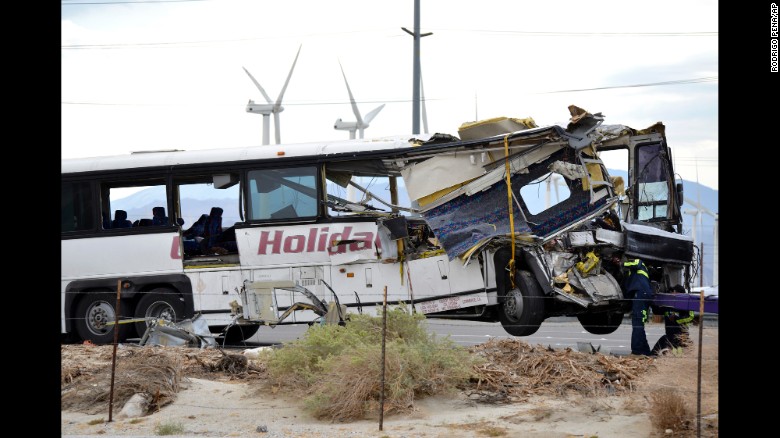 Workers prepare to haul away the mangled tour bus.
Survivors told authorities on Sunday that most passengers were asleep at the time of the crash, Abele said. The victims were found in their seats and most of those killed were sitting in the front of the bus, Abele said.
“In almost 35 years I’ve never been to a crash where there’s been 13 confirmed fatalities,” Abele said on Sunday. “So, it’s tough, it’s tough for all of us.”
He said the bus had been inspected in 2014, 2015 and, most recently, in April of this year, with no mechanical problems reported.
Video from the scene shows dozens of firefighters with ladders inside the mangled remains of the tour bus, struggling to reach the victims.
CNN affiliate KESQ reported then that rescuers used a crane to search the wreckage.

Abele said there was no fog at the time of the crash. He said traffic, including the trailer, had slowed because a maintenance crew had been periodically stringing wires across the roadway.
Abele said “the bus was traveling significantly faster than the tractor trailer that it struck from behind.”
Guilford told authorities he “felt a thump in the back … he didn’t know what specifically happened,” Abele said Sunday.

Bus crash
© Mapbox © OpenStreetMap Improve this map
Sunday’s crash is among the deadliest in California in recent years.
Ten people were killed in April 2014 when a FedEx tractor-trailer crossed a median on Interstate 5 north of Sacramento and slammed into a bus carrying high school students from Los Angeles on their way to visit a college campus.